Smolensk – the stories of real Russia in English 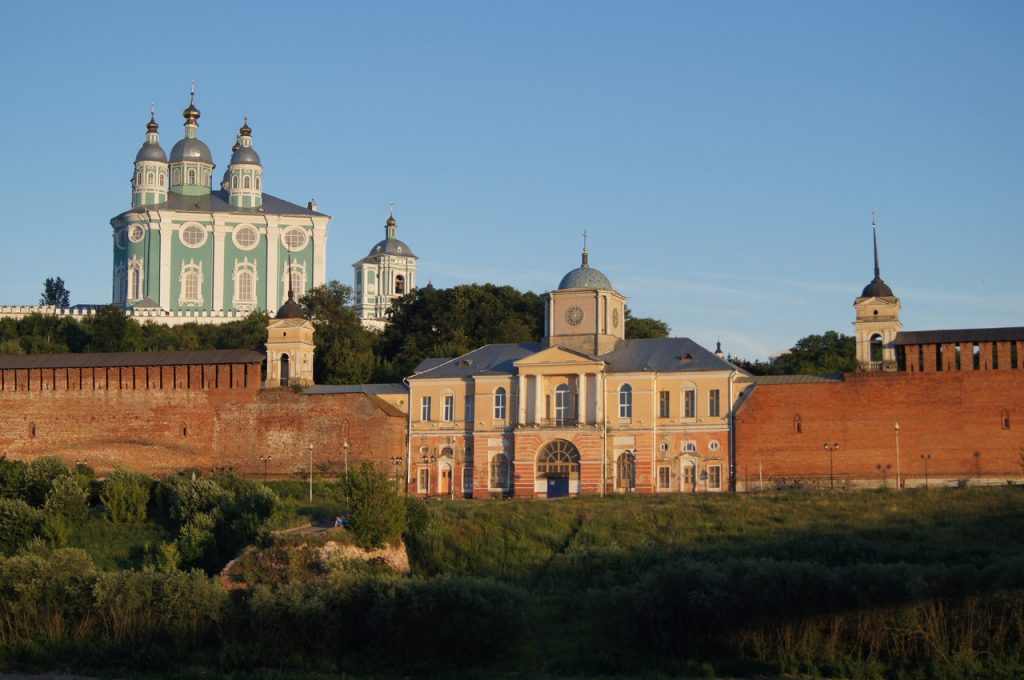 The view over the Dnieper

Smolensk is one of the oldest Russian cities with marvelous history steeped with warriors’ glory, inspiring legends and unraveling the true history of Russia. First mentioned in the chronicles in 863 A.D. it grew into the big trading city in the Middle Ages but then the fate turned it to the warrior’s path.

Through centuries Smolensk had been bravely fighting against the troops of the Polish ruler Sigismund III Vasa, the French emperor Napoleon and the Nazis. The city was destroyed many times and always reborn from the ashes like an eternal phoenix that is depicted on the coat of arms of Smolensk.

Smolensk has got plenty of great monuments and historical sites that will leave no one untouched. The outstanding piece of architecture – the17-18th century Assumption cathedral strikes everyone with its beauty, richness. The pearl of the cathedral is the icon of the Smolensk Mother of God called “Hodegitria” that takes its origin from the Byzantium and influences the history of not only Smolensk but also Moscow and all of Russia.

The mighty 17th century Smolensk fortress wall gives you the stories of real braveness and glory of the soldiers and officers of different centuries, it inspires you imagination and it’s strengthening your spirit when you walk beside it.

Plenty of monuments of different epochs will open a great book of life in front of you, show rise and fall of the empires and the eternal beauty of Russia and its people.

If one wants to dive into the depths of the centuries Smolensk provides the opportunity to visit the unique churches of the 12th century that survived in our town and the Gnezdovo burial mounds archeological complex that used to be a big Viking settlement in the Middle Ages.

If you are interested in the WWII history you can find the “Hitler’s bunker” hidden in the forest near Smolensk and get to know the elk-blogger a precious gift from the famous Hermann Göring’s country house.

Visiting Smolensk you’ll learn that a lot of famous people of Russia and the world were born in Smolensk region. They are the first cosmonaut Yuri Gagarin, the founder of the Russian classical music Mikhail Glinka, the famous traveler Nikolai Przhevalsky, the sci-fi writer Isaac Azimov and ever the man who started the Checker motors corp. and the “yellow cab” brand Morris Markin.

Being in Smolensk you’ll have a chance to taste nice food, meet good people, who’s trying to make life in modern Russia better.

My name is Mike and I’m happy to welcome you in Smolensk – the city of stories – and I’m willing to share its treasures with you. You can reach me via e-mail, Facebook, Viber or my website.

I’m a licensed guide with ten years of experience and I provide different kinds of English language tours in Smolensk region.

If you travel to Moscow keep it in mind that Smolensk is easily accessible from the Belorussky Railway station by the everyday high speed train “Lastochka”. The journey to Smolensk will take you only four hours and I will be able to meet you at the station if you need it.

1. Pop into the Assumption Cathedral. It is almost 250 years old. The baroque pretentiousness of the wooden details of the interior here competes with the peculiar script of the icons. The artifacts of antiquity are kept here and the Smolensk Mother of God Icon called Hodegetria (The one who shows the way from the Greek) hovers above them.  The scientists have recently returned a surprisingly piercing look of its face from the depths of the centuries.

2. Climb the fortress wall. It is 418 years old and is huge (about 3 km out of 6 survived). There are almost no such huge walls left in Russia, the reconstructions have not been here for a long time, so everything breathes with antiquity. Large parts of the wall stretch outside the city center, it is very cool to walk and take great photos here.

3. Marvel at the most ancient Russian monuments. In Russia, one can count on one hand the regions and cities where there is Middle Ages architecture.. Everyone knows Novgorod, Suzdal, Vladimir, Staraya Ladoga, Pskov and … Smolensk often falls out of this row, and, meanwhile, there are three 12th century churches, which are highly valued by people who have seen even all the previous cities. As a bonus, we will go to hug the ancient ruins in the most unusual place.

4. Stay in Talashkino estate. 17 km from Smolensk there is a beautiful estate Talashkino, the estate of the Tenishevs – patrons of art. Prompt renaissance of Russian art started here at the turn of the XIX-XX centuries under the leadership of Princess Maria Tenisheva,. Composer Stravinsky, artists Malyutin, Vrubel, Roerich, Korovin worked here, unique pedagogical practices were introduced here, agriculture developed, and culture flourished. Talashkino’s iconic views are the fairy-tale house Teremok, which gave the name to the museum, and the Church of the Holy Spirit bearing a Nicholas Roerich mosaic above the entrance.

5. Make a discovery for yourself. Smolensk is known as a hero city for its role in the Second World War. Indeed, there is a lot of military history here, but in fact, you will find yourself in an amazing whirlpool of centuries, events, states and people that met on the territory of Smolensk in different centuries – X, XII, XV, XVII, XIX and XX and even in the XXI – we look to the future.

6. Paint underwater. The artist Natalya Strukova lives in Smolensk, who for many years has been painting exclusively at the bottom of various seas and will teach you how to do it. How many such artists can you name in Russia or in the world?

8. Go canyoning. Right in the center of Smolensk there are deep ravines, having descended to the bottom of which you are transported 10 thousand years ago. Walk along the Devil’s Moat – the valley of the Rachevka River, which is now being actively cleaned of garbage and landscaped by caring citizens, and you will have the opportunity to stumble over a two-hundred-year-old cannonball, find a source from which Napoleon drank water, breathe in the smell of Red Book plants, see rare insects and visit a real Round Table without the help of King Arthur. You can also personally take part in the Rachevka initiative and have a great time with the great people of Smolensk.

9. Turn off the main street to find yourself in a ravine, at the bottom of which a narrow cobblestone path twists around, a small flock of sheep appears from behind a corner, and a huge five-domed cathedral hovers above all this.

10. Warm up with nice coffee and tug at the dinosaur’s socks in a cafe that was born from a pot of cocoa with spices on one rainy night, listen to musicians from different countries or just stories about travels and Indians in potato beds.

And in Smolensk, you should visit the creative spaces “Shtab” and Sreda Space, where city activists gather to touch the best urban ideas.

Feel the spirit of the city in the Mayakovsky bar.

Hear the soul of the city in the songs of Mama let’s go.

When you visit Smolensk with us, it not just tourism it’s real Russia experience, local people, communicationreal life.
Connect us 4 the tour on Instagram or WhatsApp +7 951 700 45 59